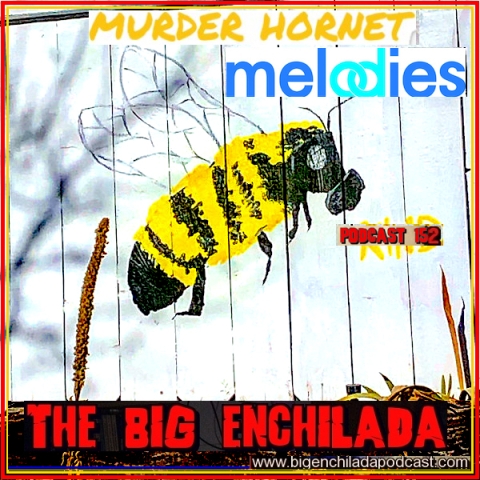 It’s been almost a year since we were warned about the evil murder hornets
about to invade, stinging us, murdering us and stealing our daughters. It
never happened. … just as the evil hornet masters wanted. And now that
nobody seems worried about the impending buzzing onslaught, we’ve grown
complacent, JUST AS THE KILLER INSECT HORDES WANTED US TO DO!!!! Fortunately
The Big Enchilada Podcast is here to warn the populace. WAKE UP AND FEEL THE
STING! Defeat the invaders with the power of pure rock ‘n’ roll!
Remember, The Big Enchilada still is officially listed in the iTunes store. So go subscribe, if you haven’t already (and please, gentle listeners,
give me a five-star rating and review if you’re so inclined.)
Thanks.
DOWNLOAD | SUBSCRIBE | MIXCLOUD | FACEBOOK | iTUNES! |
Mixcloud is now the official home of Radio Mutation
Here’s the playlist:(Background Music: Hornets Nest by Los Straitjackets)
Buzz Buzz Buzz by The Blasters
No Panic, No Stress by The Scaners
That Wasn’t Chicken by Dose
Birdbrain by Kevin Coyne
Gilligan’s Wake by Mal Thursday Quintet
Bumble Bee Zombie by Roky Erikson
(Background Music: Green Hornet Theme by Al Hirt)

The Wasp by Pussycat & The Dirty Johnsons
Commuter by Danger Cutterhead
Ping’s Chinese Restaurant by Harvey McLaughlin
Sick of You by The Revox
Alabama’s Doomed by Wizzard Sleeve
Black Cat by Herzegovina
(Background Music: Beehive by Candye Kaine)